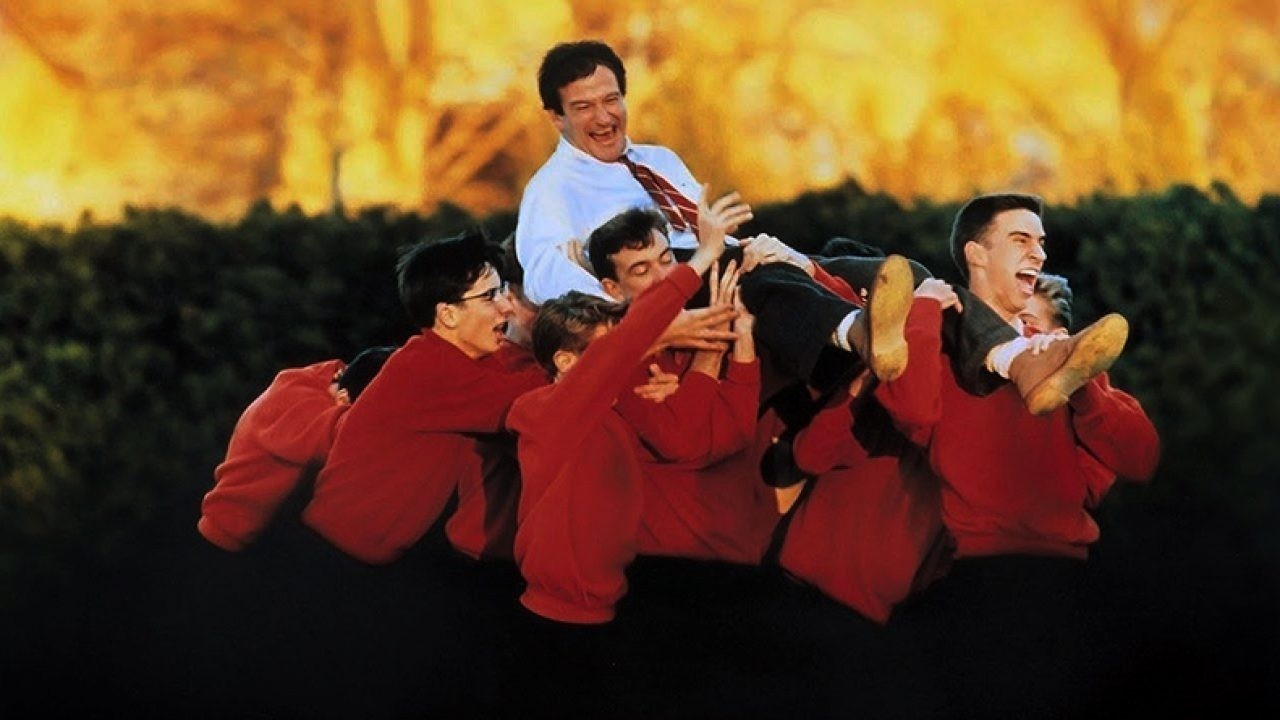 Remember, that iconic film?  Robin Williams plays John Keating, an unconventional English teacher, who inspires his class of boys at an elite conservative school to be courageous freethinkers who seize the day.

While watching the film, it dawned on me how much it influenced my thinking. I can now see some of the fruit grown from the seeds of ideas planted all those decades ago.

Take a trip down memory lane with me and be reminded of these powerful lessons from the memorable character, Mr Keating. (If you’ve not seen the film yet, what are you waiting for?)

Lesson 1: Strive to find your own voice “You must strive to find your own voice because the longer you wait to begin, the less likely you are going to find it all.”

Like all creative thinkers, Mr Keating celebrates the diversity and uniqueness of each of his students. Right from the start he encourages them to break out of the mould and to find their own creative sparks. He quotes Thoreau, ‘Most men lead lives of quiet desperation.’ Don’t be resigned to that. Break out!” 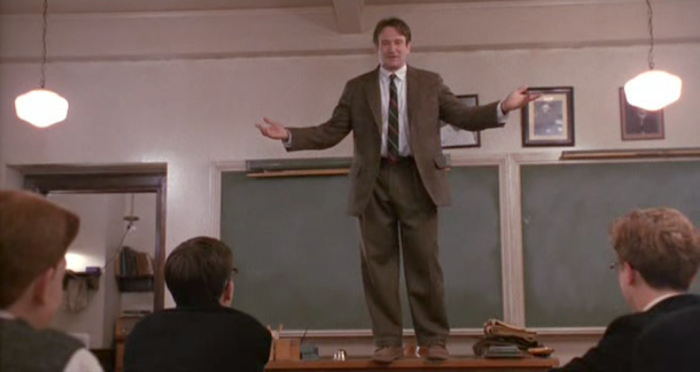 “Just when you think you know something, you have to look at it in another way. Even though it may seem silly or wrong, you must try.”

In one of the most famous scenes in the movie, Mr Keating climbs onto his desk so that he can look at the classroom from another point of view. He explains the importance of looking at a situation from different perspectives. Neuroscientist, Angus Fletcher, calls this creative thinking technique, perspective shifting. He uses this technique to train creative thinking in the corporate world. For example, company staff might be asked to imagine a day in the life of someone at a different level in the business.

Lesson 3: Don’t conform. Think for yourself. 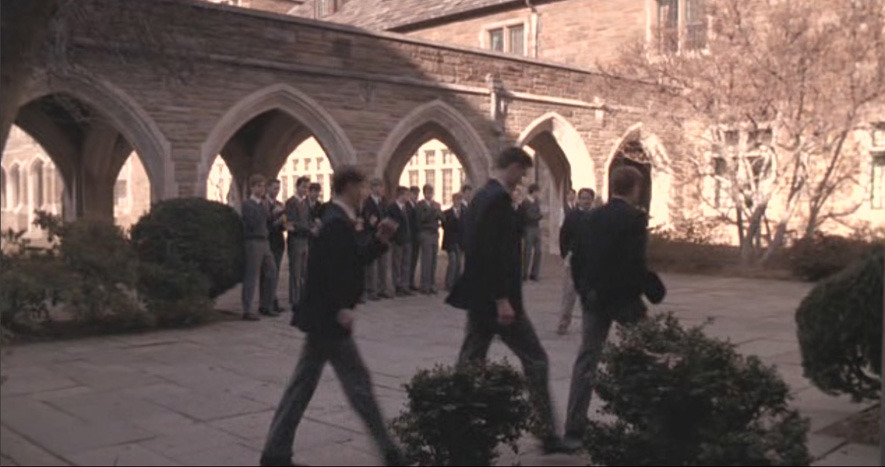 “Now we all have a great need for acceptance, but you must trust that your beliefs are unique, your own, even though others may think them odd or unpopular, even though the herd may go, "that's baaaaad." Robert Frost said, "Two roads diverged in the wood and I, I took the one less travelled by, and that has made all the difference."

Mr Keating helps his class to learn by experience. In one clever activity, he asks three boys to talk a walk in the quad whilst the others watch.  They start of walking their own way, but soon start following one another in a line, and then begin walking in step with one another. Before long the boys who are watching begin clapping in time to the march. Mr Keating uses this experience to show how quick we are to conform and fall into line with one another and how hard it is to do something different.

Creative thinkers usually experience ‘resistance’ (to use Steven Pressfield’s term) in some form or another, whether internal or external, as they push boundaries into unfamiliar and uncomfortable territory. It takes courage and determination to go against the grain. 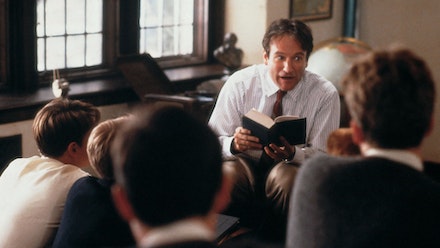 “So avoid using the word ‘very’ because it’s lazy. A man is not very tired; he is exhausted. And don’t use very sad; use morose. Language was invented for one reason, boys… to woo women. And in that endeavour, laziness will not do.”

This lesson really strikes a chord with me. In today’s world of hacks, short cuts, and instant gratification, it’s so easy to be lazy. Creativity always takes work. Our brain’s preference is to avoid threat and conserve energy. Creativity by nature has an uncertain outcome and takes additional energy in the form of courage and perseverance. I need to constantly remind myself to lean into challenges and not to lurk in my comfort zone.

Lesson 5: Savour the world with wonder 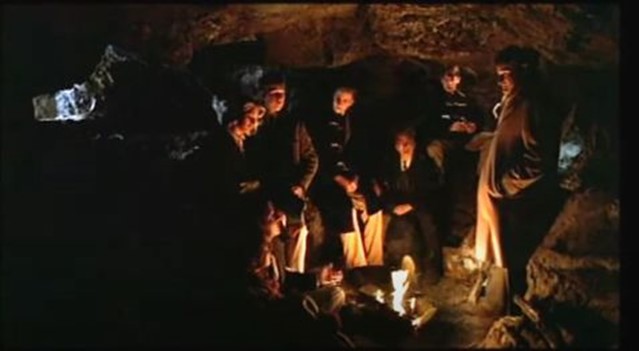 “We were romantics. We didn’t just read poetry; we let it drip from our tongues like honey. Spirits soared, women swooned, and gods were created, gentleman. Not a bad way to spend an evening, eh?”

A culture of over-consumption with a digital deluge of distraction can lead to apathy, listlessness, and boredom. Many of us have forgotten our capacity for delight and wonder. Mr Keating stirs this up in the boys as he tells them of the Dead Poets Society to which he belonged at school. The boys soon follow in his footsteps and form a society of their own, meeting in the cave to read poetry and make up some of their own. The evenings stir up creativity, dreams and courage. 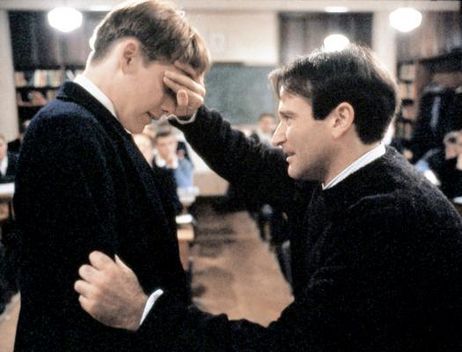 “No, you can do better than that. Free up your mind. Use your imagination. Say the first thing that pops into your head, even if it’s total gibberish. Go on, go on.”

One of my favourite scenes is the one in which the shy and nervous Todd does not want to go to the front of the class to read his poem. He tells Mr Keating that he’s not done the assignment and has no poem to read. Mr Keating calls him to the front anyway and gets him to break through his fear by keeping his eyes off the rest of the class and not worrying about what he says. Rather than perform a polished poem, the teacher gets the boy (played by Ethan Hawke) to say whatever comes into his head. The result is actually a very interesting poem. 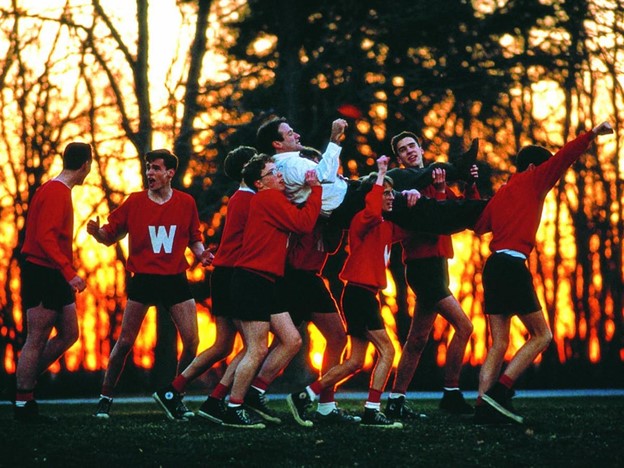 This list of lessons would not be complete without the most famous lesson of the movie: Carpe Diem / Seize the Day. This theme runs right through the movie and the phrase ‘Carpe Diem’ is repeated by many of the characters as each of their stories develop.

Mr Keating introduces this lesson by getting the class to look closely at the faces of boys who had attended their school, captured in photographs on the walls. He says:

“They’re not that different from you, are they? Same haircuts. Full of hormones, just like you. Invincible, just like you feel. The world is their oyster. They believe they’re destined for great things, just like many of you. Their eyes are full of hope, just like you. Did they wait until it was too late to make from their lives even one iota of what they were capable? Because you see, gentleman, these boys are now fertilizing daffodils. But if you listen real close, you can hear them whisper their legacy to you. Go on, lean in. Listen, you hear it? Carpe. Hear it? Carpe. Carpe diem. Seize the day, boys. Make your lives extraordinary.”

Now, over to you. What will your verse be?

To quote from Whitman,

‘O me! O life!… of the questions of these recurring;

of the endless trains for the faithless… of cities filled with the foolish;

what good amid these, ‘Oh me, O life?’ Answer. That you are here — that life exists, and identity;

that the powerful play goes on, and you may contribute a verse.

What will your verse be?'